Let me show you My NOLA

Bar Marilou’s New Year’s Eve party will feature an open bar with passed canapes from 10 p.m. to 1 a.m. A live jazz band trio will perform from 9:30 p.m. to 11:30 p.m. before DJ Tristan Dufrene takes over from 11:30 p.m. to 1 a.m. Throughout the evening, there will also be various interactive performances including an acrobat duo, Snake Charmer and Burlesque performer Xena Zeitgeist, a contortionist, and Drag Artist MaryBoy.

Tickets are $95/person for standing room and $150/person for seated and will be available at BarMarilou.com 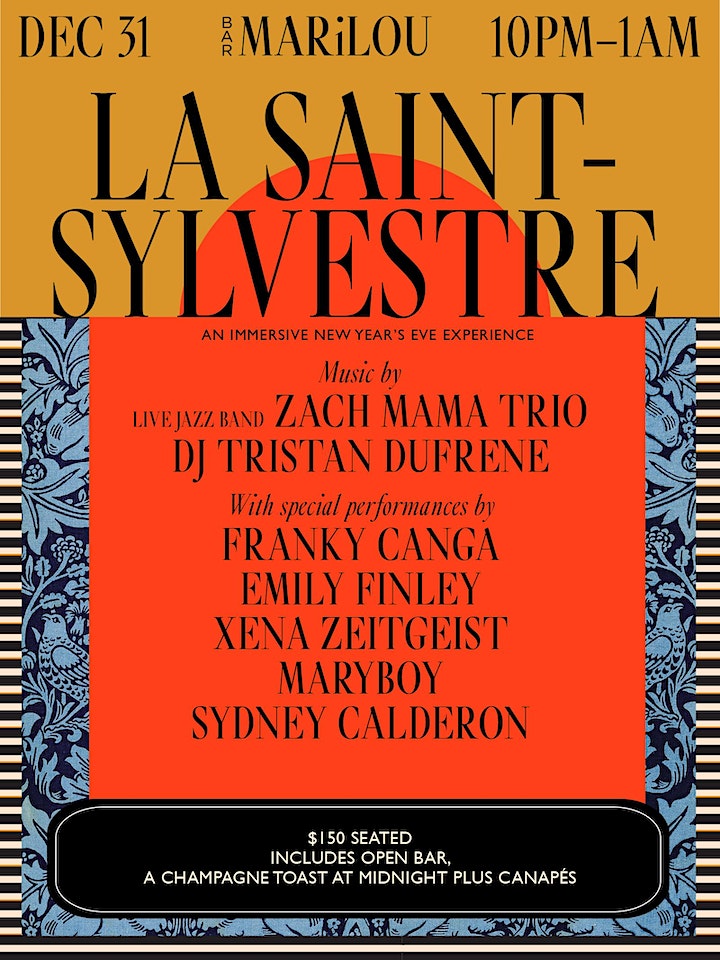 The first-ever U.S. project by Quixotic Projects, Bar Marilou’s beverage program is developed by Joshua Fontaine, Adam Tsou, and Carina Soto Velasquez [who was inducted into Tales of the Cocktail 2019 Dame Hall of Fame], and features an expansive selection of apéritif and specialty cocktails available in three sizes (small, medium and large), alongside a thoughtfully curated natural wine list.

A native of New Orleans, who left her beloved New Orleans to spend twenty years of living in the land of Minnesota Not So Nice. Minnesota was full of opportunities but would learn that the soul of the state and the people who made it was just as icy cold as the temperatures. After the years and my 40th birthday flew by, I decided it was time to pack up my youngest child and come back to my roots, my birthplace the city that not only birthed me but gave me life. I would not be who I am without my New Orleans beginnings. I am all things that would challenge the belief of growing up in New Orleans. I was a 16yr old teen mother of a premature baby born with a severe medical disability. And only With the help of my mother, was it possible for me to BE! I was able to endure and survive the obstacles laid before my child and me. In a city that was built by my family, but did not allow for us to reap the benefits I overcame. Charity Hospital was my second home — a building filled with miracle workers who made it possible for my daughter to have life. I have lived a life of rainy days with peeks of sunshine, that are my children, including those not of my womb. I'm the proud mother of three and a grandmother of three. My dream was to live the life of the nursery rhyme of ”The Old Lady Who lived in a shoe,” and for the most part, I did. I cared for several children over the years as a special needs foster parent. I would learn that my love was not enough for some children, but I loved them through their pain. I'm not sure if I ever had a case of true love or came close to what love looks like on television, but I had my share of men and the mirage of love. I survived two abusive marriages. Though I longed to return to New Orleans on a daily bases, I must admit my move was one of the best decisions made for me. I am a college graduate; I was a successful entrepreneur. I coowned a soul food restaurant and catering company in Minnesota for 12 years. I developed the talent of creating custom cakes after the murder of my beloved cousin Melvin Paul. He survived Katrina only to go to Minneapolis six months later to be murdered over a parking spot dispute. But with the challenge of creating a simple wedding cake, I was able to find healing. I created the House of Cakes in honor of him. Minnesota life had me pretty materialistic. I worked to the point I do not remember much, but work and handing my children love money. I thought by having the big house on the hill, a husband, having a family, the ultimate provider and being involved in all things that matter, plus having the funds to match would cure me of what I was told was a generational curse of lack of everything from money, love to even self-love. But for the most part, that life poisoned my heart and soul. I was blinded by visions fed to me by the media. I was told I wasn't anything unless I was better than the Jones's. I lived being ok with a broken, bleeding heart. Life like this did not exist in my family while living in New Orleans from what I viewed with my eyes and soul. We may not have had all the things I acquired over the years, but we were happy, we were together. Family outside of New Orleans wasn't family anymore. We lived separate lives and had awkward moments when we bumped into each other in public. I hated living in Minnesota even though life their helped me in so many ways. I felt deep down the only way to repair it was to get back to my roots, my soul, my home, myself, my New Orleans. I'm here, and I love it. Even being in the so-called Blighted Area of New Orleans and not having all the financial and material security, I'm happy. I am determined that She, yes, New Orleans is a woman is just like me; together, we will overcome and will rise from all that tried to kill our spirit. Nothing like starting from the bottom and making your way back up!. I just know in my heart that New Orleans will provide for me. There's a bank account with funds in it owed to me by way of back pay for my ancestors. And I will receive my inheritance, and I will continue the traditions and customs of the old to keep the heartbeat of New Orleans beating. I'm down in the boot, living the life that feels right to me awaiting my destiny...