Spring is beautiful in New Orleans, and today, my neighborhood is full of life, and I have a front-row seat to view it. I planned to go to the Second line, but Niyah still has a low-grade fever since filming on Friday. If it were up to her, we would be walking the streets of New Orleans following the Brass Band’s beat and the soulful footwork of the Second line Club and other locals in attendance. All it takes is for her to hear the sounds of children playing as I open the windows to let the heavenly smell of the New Orleans air into the house to freshen the rooms with Mother Natures’ free perfume. Who needs a room deodorizer when the aromatic fragrance of jasmine, honeysuckle, iris, and roses permeates in the wind. Within minutes the soft knock of her favorite playmate is the cure to all that ails her. As quick as she opens the door to greet her friend, she magically appears fully dressed with one foot out the door, and the other is anxiously waiting at the park across the street. 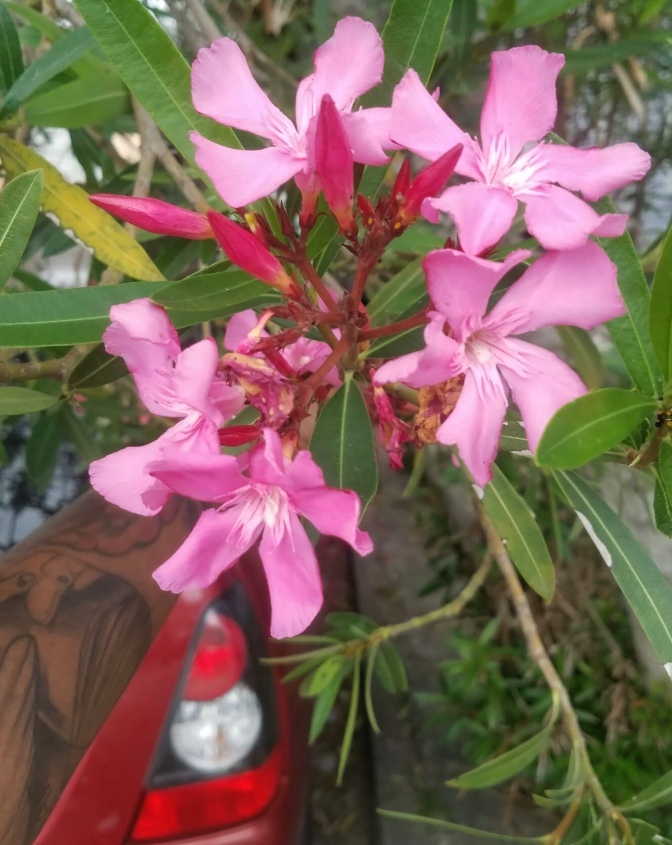 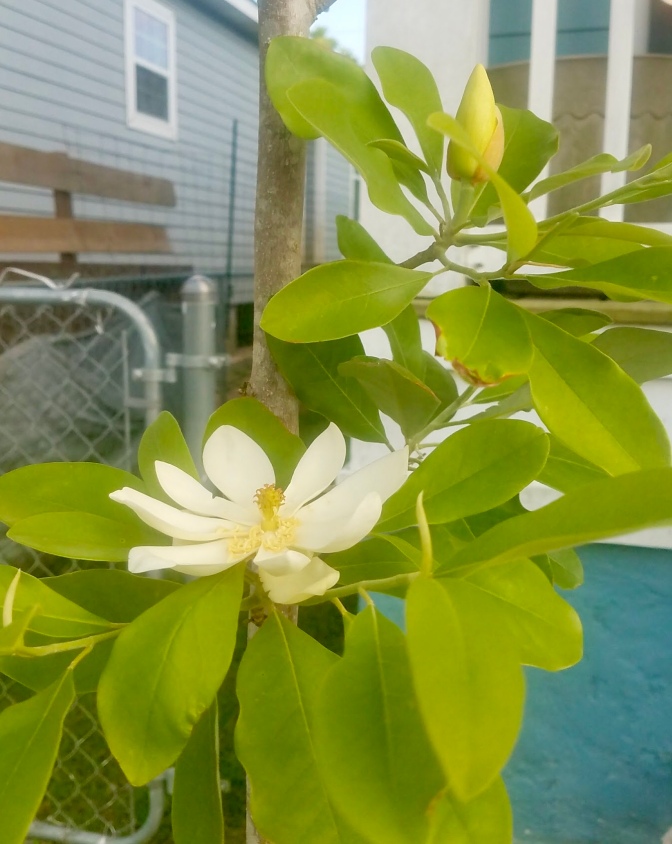 Before she dashes of to the land of creativity and imagination that continues to exist in the minds of New Orleans little boys and girls, she yells, “Mommy, it’s really nice outside we should go to the Second line! I feel much better now, Mommy! Oooh, Mommy, those people are back at the park, giving out snow cones and cotton candy again. I see the truck! Can we go over there? I’ll get some for you, ok, Mommy?” Off they go, leaving the door wide open, but closed the screen door without a reminder. I walk toward the living room to close the door, but I was met with the wondrous sights, sounds, and scents of New Orleans. She’s right, and it was better than a beautiful day! I found myself stuck in my doorway with my head leaning on the doorframe with my eyes closed taking it all in. 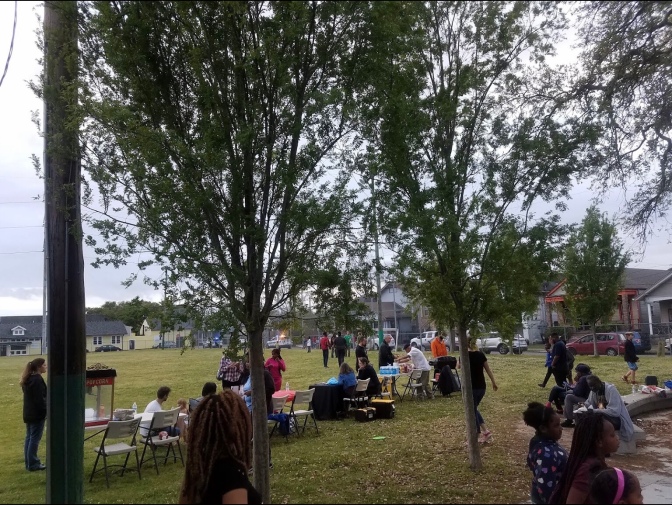 The sweet laughter and sounds of the children playing at the park trigger childhood memories. The playground equipment seems to come alive, begging for the kids to come to play with them. Their little feet pound the rubber blacktop as they race to be the first, and it doesn’t matter if it’s the slide, swing, or merry-go-round. ”My hand was here first” if you didn’t know hands, not their bodies determine who made it first. There’s also the “I called it first!” being yelled and debated. It doesn’t take long for the fussing to turn to ”Weee’s & Yippie!” as they take turns to swoosh down the sliding board. The bang of the wooden plank of the seesaw gets my attention. The kids take turns suspended in the air as their legs dangle and dance, giggling and pleading with the other to let them down gently. The loud plop and even louder crying of the trusting friend are met by the words,” I told you to jump off when I did. Sorry, then.” My butt has felt the spanking of the seesaw as it bounced off the concrete many times back in the day. The wheels of bikes, skateboards, and scooters come to a screeching halt as teenage athletes simultaneously jump off as off, letting go of the handlebars as their possessions fall to the ground. Their basketballs kiss the court with each bounce awaiting the net’s yarn embrace in anticipation of the game to start. 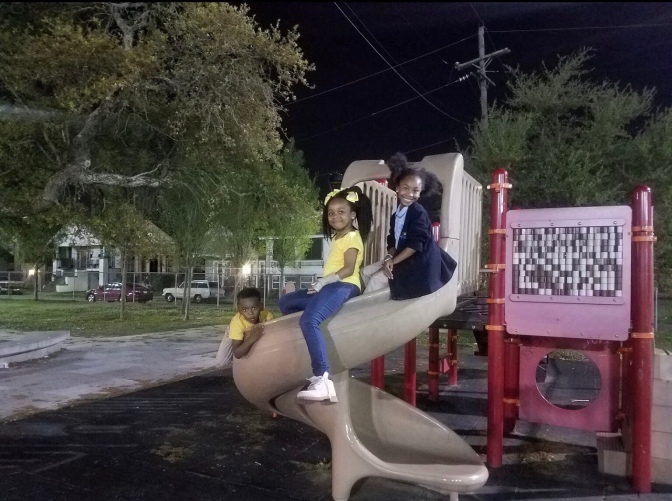 Without looking, I can see my neighbors sitting on their porches. The smooth, soulful sounds of Frankie Beverly and Mase playing simultaneously with the sounds of snapping fingers, clinking glasses, the shuffling of playing cards, and the cheerful greetings of New Orleanians who proudly let their thick New Orleans accents roll off their tongues. “How are you doing, babe? Tell, yea Mama to bring y’all down here later to get a fish plate, ya hear.” The music is turned up when a New Orleans beat is heard, lifting everyone out of their seats before the verse comes in. They proudly sing along with one of Nola’s Shining Stars as if the artist is one of the family, but in essence, we all are connected by our extended families, communities. Handkerchiefs are pulled out, signaling the start of an impromptu New Orleans SecondLine Dance. Colorful pieces of fabric dance in the air while feet and hips stomp the porch and sidewalk with soulful rhythm. The beat has caught ahold of the kids; playing is put off till later to join in on the cultural dancing and unplanned celebration. We didn’t miss the SecondLine after all… 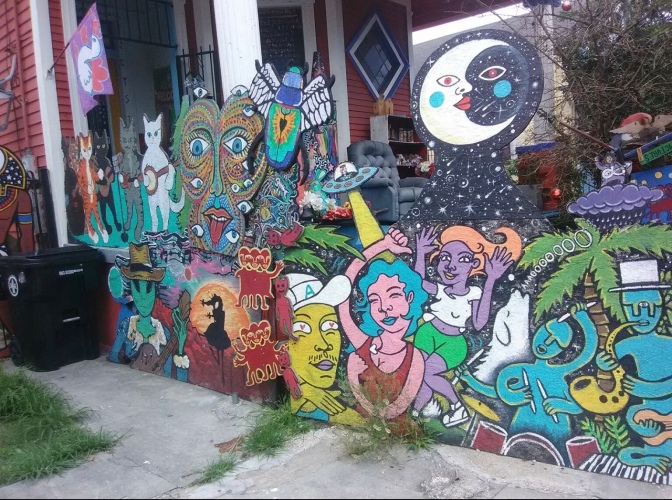 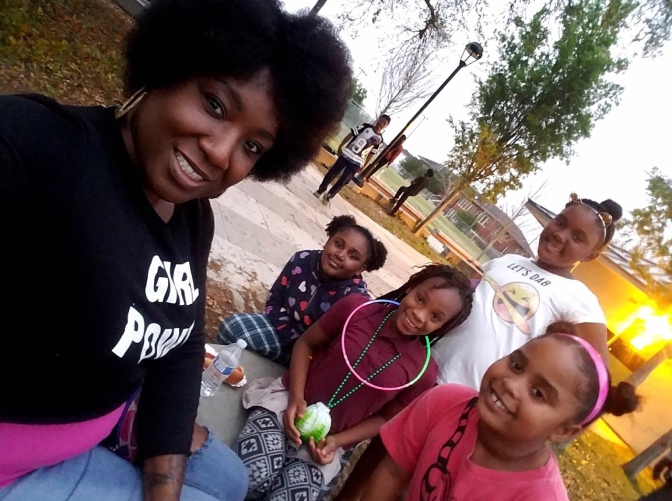 Across the street from the park is where souls lay silent to the world as they rest in their cemented homes at St. Roch Cemetery. Their sleep is interrupted by the joyful chorus played throughout our neighborhood. The high pitch laughter of children and the soulful singing of adults is enough to wake the dead, but I believe it’s music to their ears. The sounds of the neighborhood grant them an escape from the confines of their tombs, allowing them to come alive once again. Only in New Orleans, life and death can coexist. There’s no way one can resist the urge to celebrate life even when surrounded by death in a neighborhood such as this. I look over at the white-painted cemented walls with mausoleums peeking over the neighborhood, home of those who remain nosey loving cultural gatekeepers from their grave. They continue to pull up the window to peek out to see what’s going on in the community. Their tombs are here to remind us of their contribution to our lives, neighborhoods, and our city. 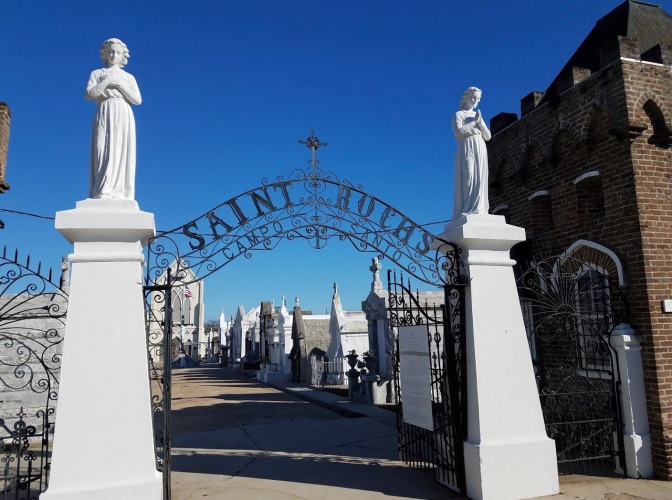 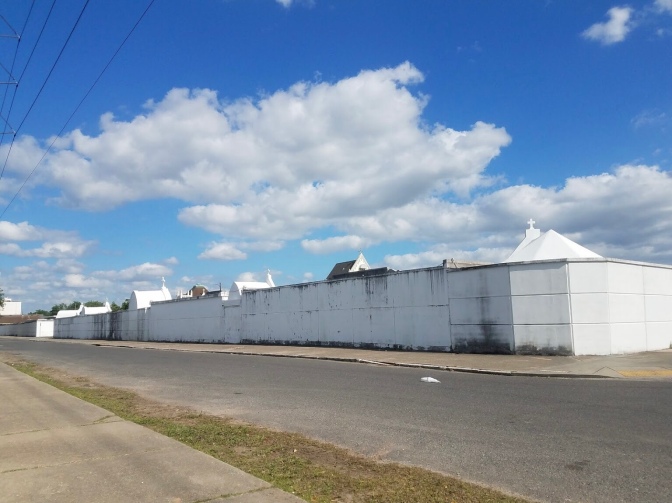 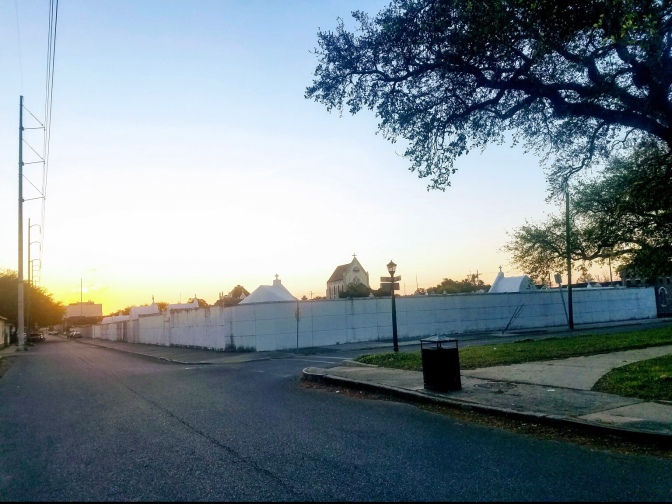 I can hear the pop of a baseball scream as it flies through the air looking for a soft place to land. The batter As takes off running to the bases as a dust trail follows behinds and settles as he lands on third base. The stands are filled with cheering fans, that is until they realize the ball has found its landing in the soft leather glove of an outfielder. His eagle-like eyes focus on the player at third base who contemplates making a go for it. Then he extends his muscular arm, throws the ball, and the flash of white light and a cloud of dust race to the base. This the loud voice of the umpire declares ”Safeeee,” and the crowd cheers as the player reenters the pit. The pops, swings, and cheering fade out as I’m taken away. 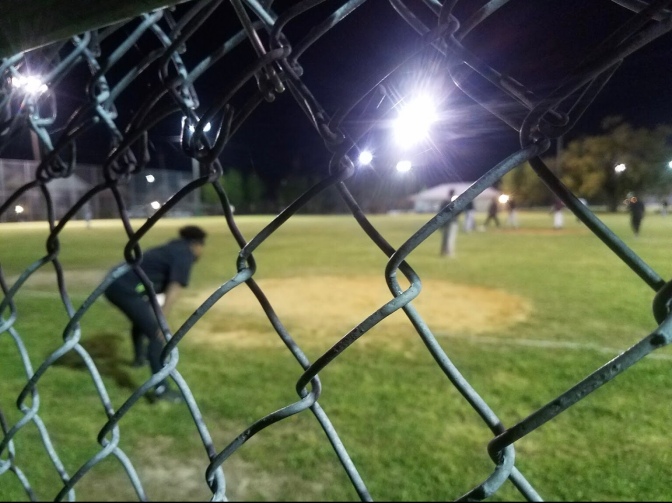 The sweet tunes of a saxophone take my attention away from all that is going on in the neighborhood. The ballad is one of two lovers caught up in their love for each other. The musicians pinned an intoxicating spell of sensual notes to be played on his voodoo saxophone. I’m caught up in a whirlwind of musical seduction as I slowly feel myself slow dancing alone as my lover sneaks up behind me. The music suddenly stopped, but it magically played in my heart. 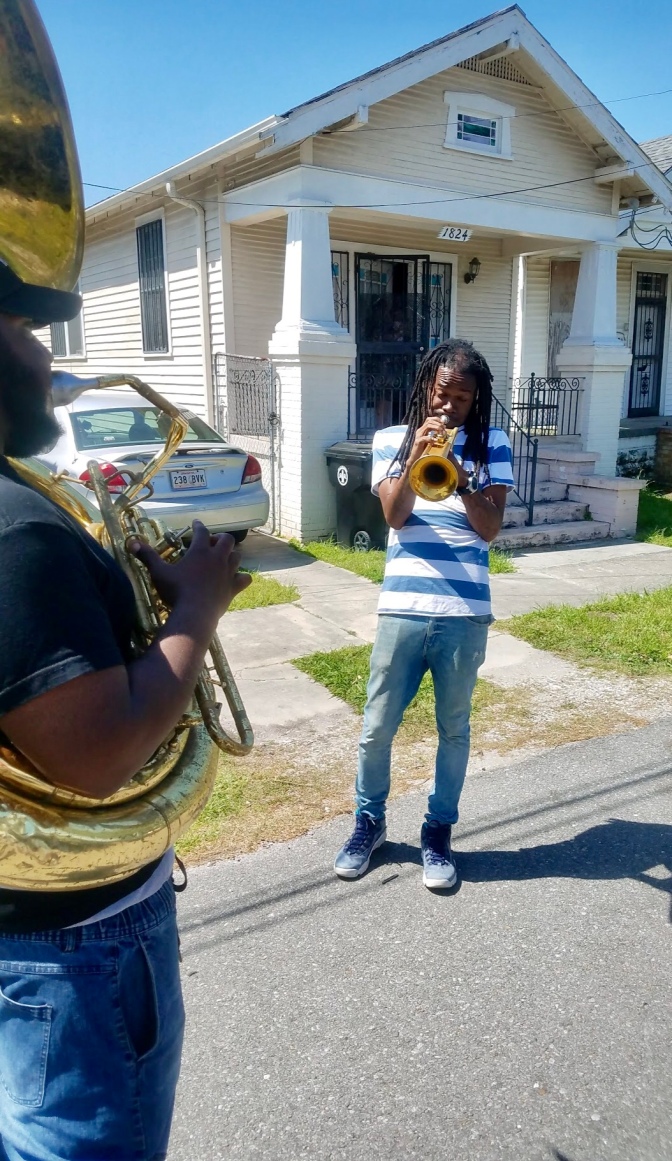 The sounding of the train’s horn has stirred up the dogs. They all join in with different ranges of barks, some barks sound to echo “Welcome home!” While the others sound grouchy because they can’t chase the train up the track. As the train settles in and the dogs settle down, the church bells and random cockadoodle doo of the neighbor rooster sing the song of Mr. Time. The church bells ring at 6 o’clock. And I have been glued to my porch for hours. 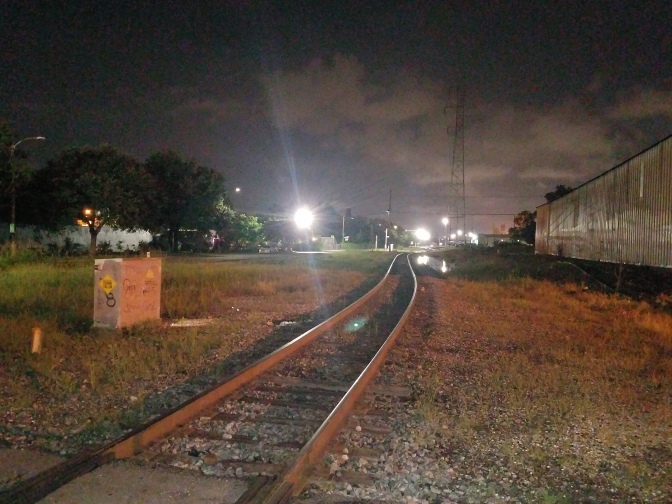 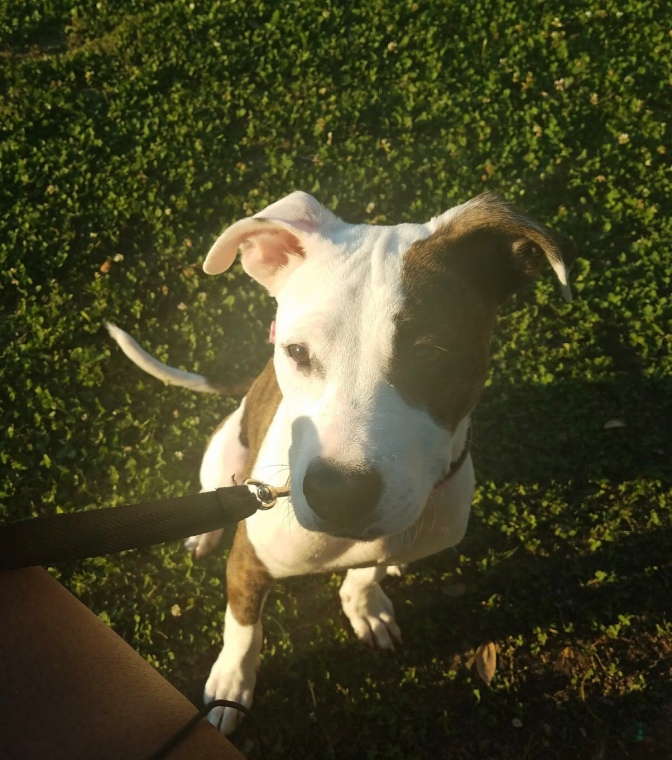 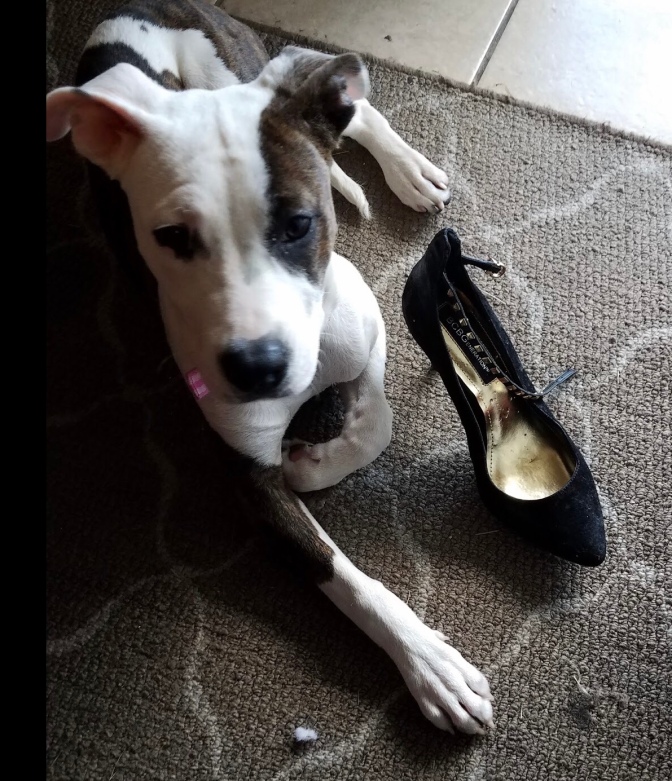 The smell of Sunday dinner teases my tastebuds. The crispy golden crust of the most flakey catfish, old-fashioned cheesy baked macaroni and cheese, not so good for you anymore snap beans, potatoes and salt pork, is the air tastes of the crispy golden crust buttery cornbread and for dessert creamy pecan candy with the perfect ratio of sweet to pecans. My stomach lets out an angry growl waking me from my trance, realizing that the air I am tasting has no substance. As I open my eyes, I’m pleased to see all that imagined sat right before me. It all was going on right outside my door, amid my neighborhood.

The sights, sounds, and pleasant smells of my neighborhood brings comfort to my heart and soothes my soul. I hope that sharing my NOLA will satisfy the desire to visit until you can visit our fascinating city. Just know that I’m here to give you a personal virtual tour of my Nola Life until then! 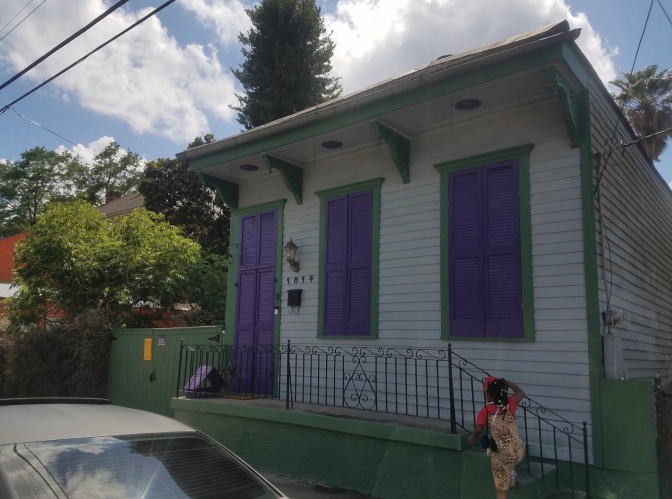 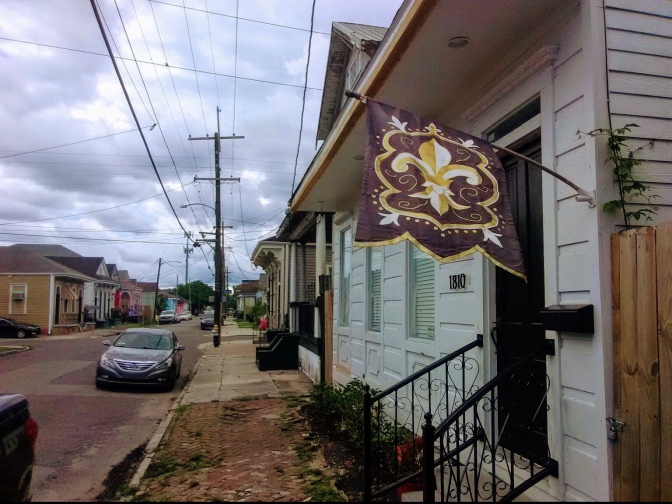 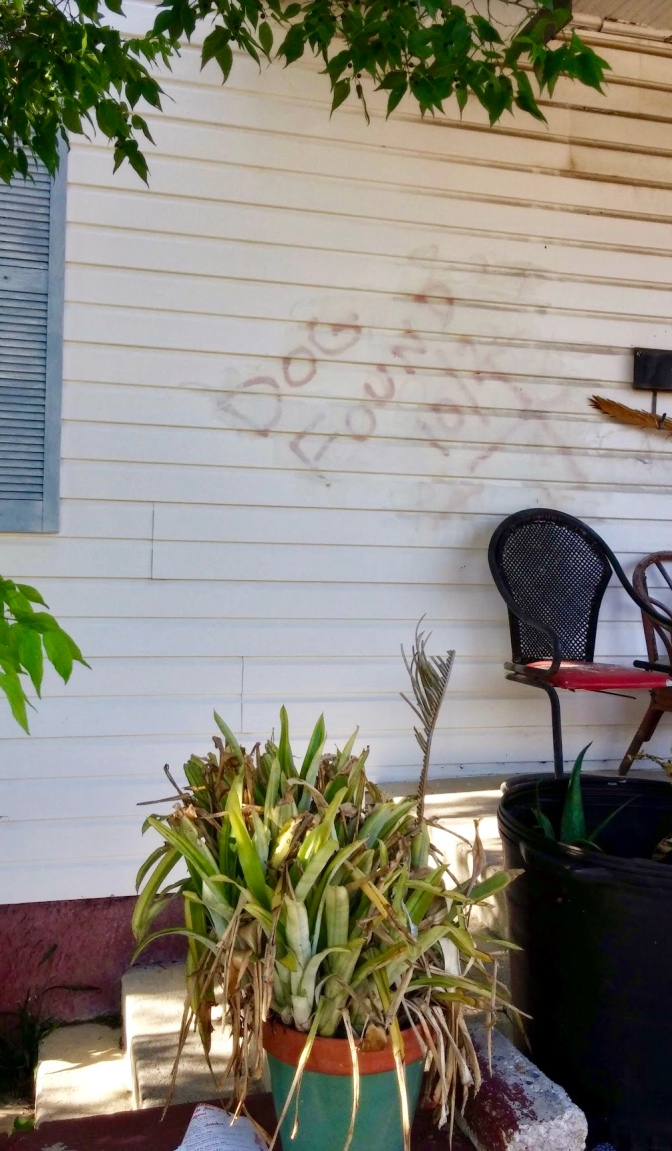 Do I have to tell y’all I walked to my neighbors to get me a dinner plate???😂😜 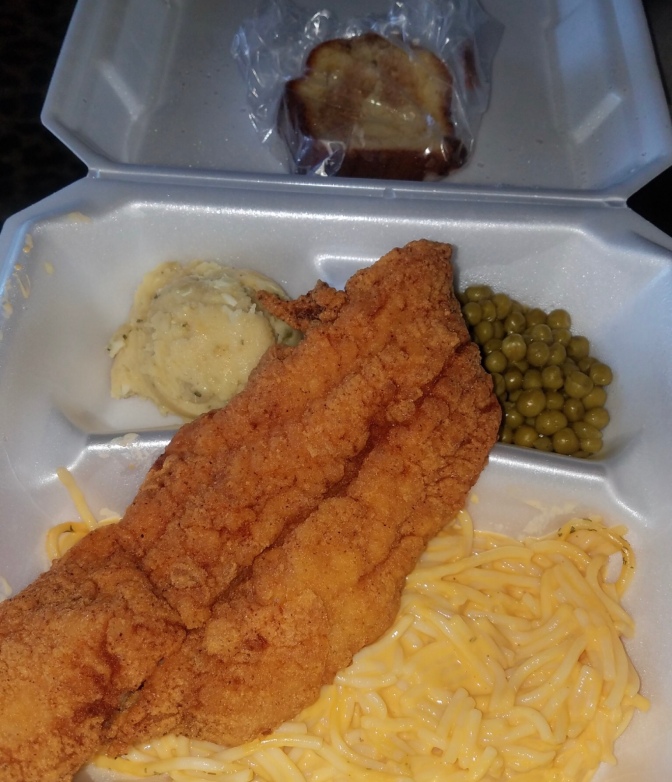