We are hours away from laying to rest our beloved New Orleans Black Masking Indian (once known as Mardi Gras Indians) Big Queen Kim Boutte, a New Orleans native, tragically died of a gunshot wound on Tuesday, August 11, 2020, at a  repast. She was only 55 years old. “My aunt was an innocent bystander. Just standing outside. Never in a million years did we think this would happen,” said Nakia Boutte, the niece of Queen Kim Boutte.

It will be a beautiful New Orleans homegoing one fit for the Queen that is Big Queen Kim. The Boutte Family and the Spirit of Fi Yi Yi Tribe will be joined by extended family and friends, including members of other Black Masking Indian Tribes, on Friday, August 21st, and Saturday, August 22nd to celebrate Big Queen Kim’s life in traditional New Orleans fashion. The funeral will be unlike any other we have experienced together, and it will be a hard one. There will be tears, chanting, singing, and dancing as her spirit leads us through the streets of New Orleans.

Big Queen Kim’s death, no murder, is new to our community, actually New Orleans as a whole.  We lost a New Orleans Icon and Cultural Bearer to senseless gun violence. I have researched but can not find a time at least in the twenty century that one of our icon’s obituary lists their death as being a murder victim. Most have grown old or died from illness, and those reasons make it a little bit easier to say goodbye. But Someone killed our beloved Queen! How do we recover as a community to something so cruel? We are told early on to not be sad for those who die because they are in a better place. “The day I die everyone should sing” comes to mind, but deaths such as Big Queen Kim’s will be hard on our hearts. No one will be able to contain their emotions, no less cry out in despair. Not only will there be grief-stricken hearts and tear-stained faces, but there will be souls filled with anger and disgust.

We lost a New Orleans Icon and Cultural Bearer to senseless gun violence. I can’t believe we are living in the twenty-first century and are burying innocent people; our children, leaders,  and cultural bearers.  Big Queen Kim did not succumb to deadly Coronvirus or the battle she fought and won with cancer, but she was killed after saying goodbye to another departed soul. Kim masked up since she was five years old many, took to the same streets and routes that were once soaked in bloodshed from Indian battles in honor of the spirits of her ancestors of long ago. We aren’t living in the day of the past when explorers invaded America and killed Native Indians. New Orleans Indian tribes, gangs no longer take to the street to settle wars, but like the lyrics to the song, “Killing em dead with the needle and thread” is their way of settling battles these days. And yet she was killed as if her tribe was ambushed in broad daylight!

Big Queen Kim’s life was dedicated to the Black Masking Indian culture since the age of five with the Mandingo Warriors and Spirit of Fi Yi Yi. Her Uncle and Big Chief Harris’s voice radiated over the crowd as he and Big Queen Kim’s spirit lead us back to Solider’s Field as he shouted, “She was My Queen!” during the vigil on Wednesday, August 12th. It was a beautiful evening as hundreds of people packed the streets of Treme to honor our beloved Queen’s life. “She loved the culture,” says Big Chief Victor. “It looked like she was born to be a ‘cultural-ist’ be it Mardi Gras Indians or second-line clubs – uptown, downtown, she was there.” It was under Chief Harris’ supervision that Boutte learned to sew and soon created her own designs.

Words can not describe the legacy she has left us as she was the epitome of the Black Masking Indian culture. I believe her image and all that she embodied deserves to be etched in stone in New Orleans. She was just that big! She influenced and gave to the culture, and her life must be celebrated and remembered forever. If you ever witnessed her in action, you would agree. Big Queen Kim had this louder than life voice that will continue to be heard as she rests in peace. When she suited up and took to the streets, she transformed and went back to the days of yesterday with her tribe. You could feel the spirits of her ancestors come alive as if they took over her total being. You could see the passionate flame that fueled her spirit shimmering and shine in her beautiful jewel-like eyes. She was a small woman, but when her foot hit the streets, it sent vibrations through your body, and her soulful chanting would leave you spellbound.

My goodness, she gave me life! It was magical just being in her presence, plus she was so fun and outgoing. She was a pure joy! What I loved about Big Queen Kim was that she invited you into her world and culture of the Black Masking Indian, and she gave a magnificent performance. She didn’t just leave you there in the streets following her around, but if she sensed that you wanted to know the culture, she fed it to you, and I ate. This year would have been my first year with her as she prepared for Mardi Gras Day 2021. I’m heartbroken, but at least I have that, she was willing to take me under her wing, teach me how to construct and sew an Indian suit. I was excited to learn more about my ancestors and our rich cultures and history from a Queen’s view.

Big Queen Kim “Cutie” Boutte was a high spirited fun-loving, lively woman who was loved by many many people. I like so many others will miss her dearly, and even we do not have tomorrow with her, we are blessed to have been left with her priceless legacy. We can’t let Kim’s life as well as others who have been killed be in vain! As Big Chief said “We need peace! The killing must come to an end!”

Photos from the Vigil for Queen Kim Boutte At 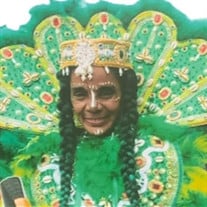 Big Queen Kim Lynn “”Cutie”” Boutte was born on October 7, 1964. She entered into eternal rest on Tuesday, August 11, 2020, at the age of 55. She was the beloved mother of Racquel “”Teedy Roc”” Boutte (Tron) and the late Matthew “”Matt Matt”” Boutte; and the daughter of Emelda Boutte and the late Robert Boutte and the fiancé of Troy Ancar. In her youth, she was a celebrated track star. She was also a fierce competitor in softball with her team NOLA Women. Kim was a graduate of Francis T. Nicholls High School; however, she received her cultural education at Tambourine & Fan. She worked for several years as an employee of Sodexo at Tulane University. Kim was a member of The Church Without Walls and was a faithful student at bible study. Kim was the “”Big Queen”” of The Spirit of FiYiYi and The Mandingo Warriors with her uncle Big Chief Victor Harris. As Queen, she was devoted to teaching these unique traditions to friends, family, children, and the next generations. She adored teaching the children cultural traditions, Indian songs, and dances, and bringing out the youth each year. Kim was preceded in death by her brothers, Matthew “”T-Low”” Boutte and Robert Barnes; Grandparents, Robert (Noella) Boutte, and Andrew (Alma) Harris. Kim leaves to cherish her memories her brother, Robert “”Lil Bobby”” Boutte; sisters, Kathy, Ronda, and Michelle Boutte, Linda Beaton, and Rhonda Barnes; and a host of uncles, aunts, nephews, nieces, cousins, and friends. Big Queen Kim also leaves a vibrant and fierce spirit of generosity, energy, song, dance that will live forever in our hearts and in the indigenous cultural history of New Orleans. A public drive-thru viewing will be held at D.W. Rhodes Funeral Home, 3933 Washington Avenue, New Orleans, LA 70125 on Friday, August 21, 2020, from 4:00 pm until 7:00 pm. Relatives and friends of the family, Employees of RTA, Members of Spirit of FiYiYi, Queens of The Nation, Tambourine & Fan, Circle of Chiefs, Entire Nations & Tribes of Mardi Gras Indians, Social & Pleasure Clubs, NOLA Women, and Crescent City Softball League are invited to attend a Visitation at the Treme’ Center 1400 St. Phillip St, New Orleans, LA on Saturday, August 22, 2020 beginning at 8:00 am until 10:00 am. Join us by Livestream for Funeral Service on the Rhodes Funeral Home Facebook Page at 11:00 am. Interment: Providence Memorial Park Cemetery. Due to the Government Social Distancing Guidelines, a mask is required to attend service. Arrangements by D.W. Rhodes Funeral Home, 3933 Washington Avenue. Please visit www.rhodesfuneral.com to sign the guestbook, leave well wishes, share memories and condolences for the family.