As I walked through New Orleans’s streets towards the Super Dome, I could hear strong rhythmic beats getting louder as I grew closer. I knew the familiar sound was made by someone beating on a bucket, but I would have never guessed that the artist would have been a little girl. People stopped to dance while others circled a cute little girl as she beat on the buckets with so much passion. How could this child create the soulful tunes with her small hands and innocence? But she was, and I could see it all play out in her facial expressions. The beats she made spoke of survival, hope, and faith in the days to come.

She looked confident as each stick hit its intended bucket, as if she knew for sure that it would produce a beat that will get the crowd dancing. Joy and bashfulness took over her as the crowd grew thick. She was loving and living in the moment. I would say she enjoyed the sounds she created more than the group she captured. It was as if the beating of her heart was in sync with her very being. Her mind formed the music, hand and sticks flowed like blood to her heart, and drum beating the tunes reminiscent of our ancestors playing in Congo Square. This little girl and the sticks and buckets are the lifelines to our New Orleans history. Her soulful beats echoed sounds of hope, possibility, and greatness for New Orleans’s future cultural bearers.

I literally could feel this child’s heart and soul through her beats. I was lost within the rhythms of the plastic bucket and lost within her little world on the corner of Poydras and Loyola. I wondered if she knew her music affected me in such a grand manner. I stood musically spellbound, wondering, ” How can she inspire me with sticks and mop buckets?” Then it hit me. She was a survivor, a product of our ancestors and the environment. She had the soul of an overcomer and the passion that made dreams come true flowing from her.

This young girl knew she had a talent and quite possibly knew that her family could not afford drums nor class. I imagine she made use of the objects she had available to her out of the pure desire to play, practicing, mastering her craft every chance she had. And when the time came, she searched for the perfect platform, followed by courageously stepping out into the ears and sight of New Orleans. She did so, knowing that she had a competition with seasoned street performers, especially the boys. The boys could beat harder and seldom drum alone, which added a depth of harmony that she could not compete with, but she had her unique sound. It was magical, and her music floated through the air, capturing Saints fans’ attention. Plus, she was a sweet little girl.

Despite all this, she goes out onto New Orleans’s streets to share her talent with us. Yall do not know how I worry about New Orleans children who takes it to the streets to have a stage and most likely make money for their family…I prayed that someone was near, watching out for her. I would at least need someone sitting by me. The need to release the beat within her soul is what dared to perform on a street stage which is more challenging to face than in the snootiest theatre. It seemed like she was a pro, and knew the business of being a New Orleans street performer.

I hope she will make it off the streets and swap her tip bucket for royalty checks instead of loose change. I wish her a sold-out house at the Orpheum with an audience full of rich and famous folks, music executives, and movie producers. The little girl I witnessed play on buckets as if she was the nest Shelia E is more than a Bucket Drummer! She is a Super Star! Yes, she’s deserving of all that! 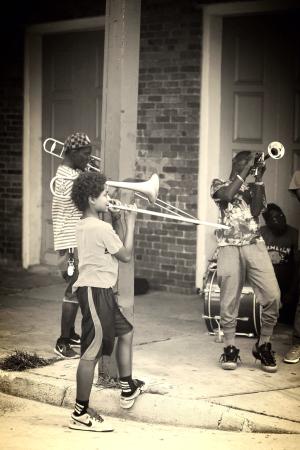 One thought on “NOLA Street Bucket Drummer: Beats OF A NOLA Girl”