While going through photo files recently, I came across this one, and a flood of emotions overcame me. I love my culture and the happenings on Bourbon Street, even though I rarely go unless dragged by someone visiting me from out of town. I have so much admiration for Street Artist because they go into the middle without knowing if their efforts will pay off. For most performing in the streets of New Orleans is their only job. A local artist who works as Street Performer hustles to make a few dollars by playing his music instead of criminal activity, hoping for a big break.

Back to the picture. My problem is that I worry when I see the kids on the street. I worry about those who do not understand our culture looking at them as a public nuisance or staying animal. I worry about the kids who have talent but no other creative outlet, but the streets of New Orleans, which hurts me. Sadly New Orleans has a high rate of child and adult trafficking, and my heart fears that can be the case when I see child performers. But just being in this adults-only environment exposes their little innocent minds to so much vaguer grownup shit, most I can not handle. I was born and raised here and run past the fake stripper legs coming out the window. Sex and booze are everywhere on Bourbon St, and thee babies are there…

Although it captures New Orleans at its rawest, the soul of a talented New Orleans native child quenching his thirst after proudly showcasing his talent to a captivated crowd, it’s not what my mind envisions. The picture is of a child musician, Street Performer, or is it that of a poor child hoping to get a few dollars in tips in exchange for live entertainment? It very well may be that He’s on the streets of New Orleans playing for a few coins, hopefully, dollars, but for what? Possibly his love for music. The creative spirit of New Orleans lives within us, and our spark of interest or unique talents are known at an early age. Or is he out there because the greedy tourism industry needs poor talented black children to fill the French Quarter and Bourbon St with all things Antebellum New Orleans? My People are the very heartbeat of New Orleans, yet overlooked though seen and very much needed for tourism dollars.

There are so many talented kids on the streets of New Orleans, putting their lives in harm’s way for the sake of their craft and our culture. That desire is in all New Orleanians, young and old, black or white. It’s in our DNA to showcase our talents to do what they love, performing. They want to be heard by the masses, they want a chance to touch the stars, and they are deserving.

These children are more than likely have to give part of their earnings to an adult, help pay bills, and buy food. Maybe, their parents do not know they are out there and, surprised when their ten-year-old comes in with money to help keep the lights on or it can be some unimaginable horrible reason. I hope they are out there because there aren’t any openings at the community arts center. Maybe, they are drumming to raise money to pay for a class. Why else would an adult let their child go on the streets of New Orleans with buckets? I know for sure that all of the free courses, no matter the type, are all full and have a waiting list. As soon as a class opens, it closes, leaving thousands of New Orleans children out on the streets, some not so creative.

My son started playing sports in elementary school, and in an effort for the team to raise funds needed for uniforms, tournaments, etc., there were fundraisers. Most of the fundraisers required the young athletes to solicit through offering a small service in return, such as bagging groceries. The coaches and a few parents were there overseeing the kids and collect the money afterward. It taught the boys to work ethic and service. He can’t be out there entertaining the public to pay bills, nor does it look like fundraising to support an after-school activity. I can’t imagine that his mother would send her son into the streets of New Orleans for a few dollars. She has to know that it’s not safe for him, not even in the daytime.

I have been known to give a few dollars to panhandlers who have a witty sign or showing their talent, but I’m unsure how to feel about supporting this little boy in this manner.
All over the world, the child sex trafficking rate has significantly increased. I’m hoping this picture did not capture that. Just this week, there were a few arrests in New Orleans. We may cross paths with children who are victims of trafficking. Some children need to be rescued, and we often pretend to be blind because we think they are runaways who want street life. The statistics are mind-numbing. Of the 6,800 runaways reported in Louisiana each year, two-thirds will be approached by a pimp within the first 48 hours of being on the streets. These children are often arrested and thrown in jail, where they get no treatment for their psychological trauma.

When I see children Street Performers out in New Orleans I’ll try to trick my mind into believing that he is there by choice after begging his Mom to play. He gets his way by reminding her that there’s no school band or they cant afford an instrument. So, she agrees, but with the term of being incognito looking as if she’s part of the street or tourist scene. In the case of this picture he is a child musician performing in front of a filming crew for Coke Cola, which produces Sprite, and he has both bottles. He’s drinking Sprite because it’s caffeine-free, and it quenches thirst. Yes, that’s it, because it certainly can not be a little 9-10yr old boy, on the streets of New Orleans, drumming on buckets for a few dollars, unsupervised, and if he is the adult, will take his earnings and do who knows what to this innocent child… Either way, I soon forget about him, and my life will go on without worrying about him, while he and other children like him are lost to the streets… 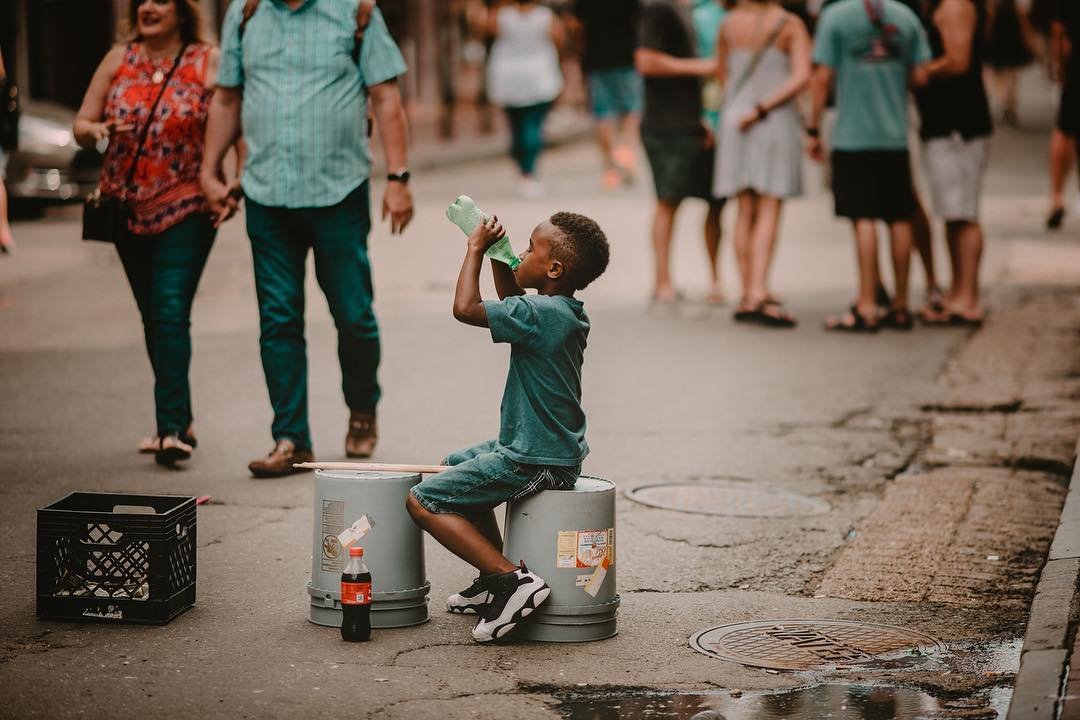