It’s around that time of year to put your orange on to march alongside the Moms Demand Action Nola-NOLA Wear Orange for gun violence awareness and in honor of the lives lost to gun violence. Over the years I marched, well in New Orleans we Secondline down the streets, but my footwerk is in remembrance of my GodBrother & Cousin Melvin Paul Jr and my Cousin Brandon Roberts, both murder victims whose cases remain unsolved.

Last year’s match was the most tremendous turn out within the organization across the states, and I’m proud to have been a part of the cause. This year I’m anticipating a more significant turn out due to the overall decrease in gun violence in New Orleans.

Too many lives have been lost to gun violence. And I’m sad to report that it seems like we all have lost loved one to murder here in New Orleans and throughout the United States.

We should not know the feeling of loss due to violence, and nowadays, most of us can relate… I remember when I was younger, when saying or hearing the word murder was treated like a bad word, now kids are familiar with dodging bullets and pulling down yellow tape by the playground. If only conflict resolution could go back to the pointing of the middle finger or putting up your dukes as thru would say. But a fight these days often ends with the loser retaliating with gunfire from an unknown location…

I honestly think if we educate the children on the effects of guns, we could change how they respond when anger hits. Plus, violence is glamorized not ever showing the life long grief that families carry with them forever.

Too many children pick up guns, point them at another child and pull the trigger unaware of the deadly bullets that await in the chamber. They do this because they see it on TV, in videos and social media, and the results are blurred out, leaving the child numb to the consequences. We have to educate our babies to save their lives. Guns kill, its that simple, but we to figure out a way to personalize the side effects of firearms.

Life is for living, and we all come into the world to die, but we weren’t birth just to be murdered. It’s a man-made problem, and we can stop it.

Please support Mom’s Demand Action Nola and Nola Wear Orange if the most you can do is wear an orange ribbon that day! There are more ways to spread awareness than attending.  I will add the link to their website for more information on events in the city.

Wear Orange is June 7th! The 5th National Gun Violence Awareness Day is when we honor the people shot and killed or wounded by gun violence, and survivors of gun violence. We honor them and renew our commitment to ending gun violence in America by taking action and taking part in Wear Orange. And for the entire weekend (June 7-9), we’re gathering at marches, picnics, basketball tournaments, and so much more to raise awareness for gun violence prevention. Will you join us?

This is going to be the largest #WearOrange ever, so make sure to find a Wear Orange weekend event near you and sign up to attend!

Moms Demand Action, along with community partners, is hosting Wear Orange! Please join us in honoring our community and its efforts to end gun violence. Everyone is welcome for a family-friendly afternoon with food, music and more. 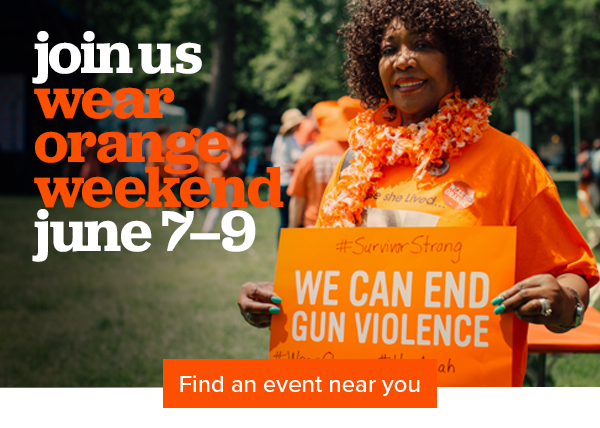 In 2013, 15 year old Hadiya Pendleton was shot and killed in Chicago. After her death, her friends wore orange to raise awareness about gun violence in their community. Then, Hadiya’s friends asked all of us to Wear Orange to honor Hadiya and the hundreds of Americans killed and wounded by gun violence every day. Hadiya’s friends and the long, proud history of the color orange carried on by advocates in the gun violence prevention movement in New York have inspired Wear Orange — which now includes a broad coalition of nonprofits, cultural influencers, and elected officials working to reduce gun violence in America.

This year we honor Hadiya and so many more Americans shot and killed or wounded by gun violence by participating in Wear Orange — by wearing orange and sharing #WearOrange online on June 7th and joining one of our hundreds of community events from June 7th-June 9th! And you can even create your own event if you can’t find one in your area!