First of all I am terrified of mice, rats, hamsters, gerbils and all rodents and I’m creeped out typing about this. I can’t look at any of the pics or videos, I had my niece download the pics to add on here. I’m sorry, but this is one area NOLA Chic hates to even speak on, but since it’s has to do with New Orleans, I have to at least say a lil something like, I can’t believe this ish!! Do you see how big these damn rats are! I dropped my phone just peeking at the cat sized rat!!! They knew, the owner, manger and staff knew and they kept on working like this. I’m pretty sure the workers were under duress and afraid to lose their jobs, but weren’t they scared of these things. They have all kinds of diseases and I know they weren’t hiding that good, a few had to be brave enough to come give a “thank you, good looking” out for the food that a customer dropped on the floor…. These things aren’t scared.. I’m scared and creeped out just from looking at a 2 second peek of the picture….

As I spoke to my sister about this article I envisioned the cartoon movie “Ratatouille” just to keep from having the heebiegeebeez. I’m creeped out, I saw the one big rat sitting like it was placing an order and the witnesses said they were on the tables, on the plates, running back and forth like they were working or patronizing the damn restaurant.

I seriously do not know if I will be able to eat in the French Quarters for awhile especially after reading how seriously bad the rodent problem is. They can’t say they didn’t know, there’s no way they didnt know these super rats were in this restaurant.. How many other French Quarter restuarants are charging high prices for rat tainted food. Just imagine that you think you have rat turds mixed in whatever it is you ordered and the owners, manger and staff laughing in the kitchen.

As I been saying it’s time for the tourist to eat and do business with the locals. At least you will high quality, clean, delicious food made by someone who cares about their business and products. Apparently, this restaurant as well as many more only care about the look, the general appearance as my Mama calls it “surface cleaning” they sweep all the rat turds away each day instead of fixing the problem. I think it’s like that downtown period, they have this snooty aire about their fancy overpriced products without a concern for their workers and a matter fact the customers.

Like how can this be a billion dollar tourism industry and the very hot spot has a severe rat problem, we can talk about the other problems later. I remember last year I was in the French Quarters just finished eating me some delicious beignets with some friends from out of town. The NOLA 300 statue thing was lit up on the Jackson Square steps, so we went over to take a picture, actually sat on the steps and as we was sitting a big axx rat came out from behind the sign, he attempted to photobombed us before walking into the bushes. I flew down the steps never to walk past that part of town. Yes, I haven’t had a beignet since last November from Cafe Du monde.

The rats walk the power wires like they are acrobats. Walking slow, not afraid of people and they bigger than cats… this is enough to make me move. I really hate those things. Like why did I have to see this???

Let me stop ranting, but here’s the article, I refuse to give yall a blow by blow account of how the rats crawled and sat.. I’m creeped out just typing that. I would have to envision the incident and I’m cool on that, I rather not have nightmares about Michael jackson and Ben….

The French Market Restaurant and Bar, located at 1001 Decatur Street, has been closed since the video posted Sunday, according to a report from WWL-TV.

The rats likely entered through a pair of broken windows and holes in front of the business. The large rats could be seen scurrying across plates and areas where oysters are served.

The restaurant’s closure is to address cleaning and repairs, according to a sign posted on the front of the building.

“I can assure you that our food service areas are 100 percent clean and safe at all times. Our customer’s health and safety are our priority,” restaurant owner Anthony Marullo said to WWL-TV.

A rodent specialist had inspected the restaurant, and the Louisiana Department of Health was contacted to conduct further investigation, WWL-TV said. 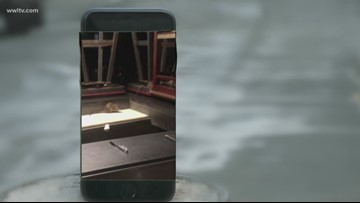 A French Quarter restaurant temporarily closed its doors after video surfaced on social media, showing a pack of rats rummaging through the New Orleans eatery after hours.

A passer-by noticed the rats inside the French Market Restaurant and Bar, pulled out his cellphone and started shooting through a window.

READ MORE: Rats are a common sight around New Orleans

The video shows about a half dozen large rodents scurrying across overturned bar stools and plates on to an area where oysters are served.

Visitors had this reaction to the size of the rats.

“Those are more like Chihuahuas than rats,” one visitor said. “They’re huge.”

“That looks like a cat,’ another visitor said. “It’s bigger than a cat.”

The video was originally posted to Facebook, Sunday afternoon.

“You never know what’s going on in a restaurant, unless you saw one of those big ole boogers run across the floor,” one visitor said.

Another tourist told WWL-TV, “That’s disgusting. I can’t believe it. We’ll cross this place off our list. Definitely.”

It appears the rats got into the restaurant through a pair of broken windows and some holes in front of the business in the 1000 block of Decatur Street.

Restaurant owner Anthony Marullo said, “The restaurant has been closed since this incident to make any needed repairs to the front of the building and I can assure you that our food service areas are 100 percent clean and safe at all times. Our customer’s health and safety are our priority.”

Marullo added, “The problem isn’t about how to deal with (rats) in our restaurant, it is how to deal with them in the French Quarter and the entire city. This is a problem every business near the Mississippi River fights daily and we spend tens of thousands of dollars a year to combat the problem.”

“The City’s Department of Mosquito, Termite and Pest Control received the video this morning. A rodent specialist immediately went to the restaurant to inspect. The Louisiana Department of Health was contacted for further investigation and inspection.”